“We are thrilled to announce David as part of the FC Copa Family,” said FC Copa President, Founder and Executive Director of Coaching Roberto Aguas. “David will play an invaluable role working with our management team to build our new offerings through our great new partnership with Aviator Sports serving players throughout the New York City Area. We are also looking forward to David leading a number of FC Copa teams on the field with his vast background in the development of players.”

“I’m excited to be a part of FC Copa Academy’s continued success in developing elite players that are prepared to compete and succeed at the highest levels of youth soccer,” said Atkinson. “The potential for growth that I see for our club, along with the chance to provide the opportunity for the players in this area to gain lifelong experiences and memories with their teammates as part of the FC Copa family, is a big reason why I joined.”

FC Copa Academy is a professional soccer organization founded in 2004, which has appeared in 26 state, 19 regional and 7 national finals & championships. FC Copa has one of the highest college placement rates in the country, both soccer and academic, having placed over 350 students into over 160 collegiate programs and developed over 24 professional and national/international team players. A soccer family consisting of over 750 members from the ages of 5 to 19 that come from all areas of NJ, NY, and PA. FC Copa is a year-round soccer development program assisting players in reaching their greatest potential with three locations; FC Copa Rutgers (Middlesex County, New Jersey), FC Copa Millstone (Monmouth County, New Jersey) and FC Copa Brooklyn (Aviator Sports in Brooklyn, New York). The focus is on educating the complete player with a knowledgeable and caring staff. FC Copa Academy teams compete in premier level leagues, tournaments, showcases, and competitions locally, regionally, and nationally. FC Copa Academy fields both boys and girls teams in each age group from U7 through U19 and beyond. In addition to the youth academy, FC Copa Academy provides a pathway into the college, semi-pro, and professional levels via its New Jersey Copa FC collegiate programs (U20 and U23) and United Women’s Soccer team. 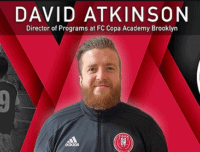