July is here again and the summer is in full swing with a few detours and special events. A celebration of our Great Nation getting another year older and the barbecue grill moving at warp speed. Vacations, cruises, our national pastime in full swing (no pun intended) and Hockey camp is ready to rock as well as the other camps and events at our facility. Busy season for those of us who are there to keep you all busy and hopefully out of trouble. July is the seventh month of the year in the Gregorian and Julian Calendars and the fourth of seven months with thirty one days. It was named after Julius Caesar who was a very powerful and important General to the Roman Army and Rome. July was the month of his birth which was originally called Quintiles or the fifth month.

Here in the Northern Hemisphere it is generally the warmest month of the year and gives us the “Dog Days of summer” in the first two weeks. What are these “Dog Days?” you ask, well it’s where Sirius, the dog star not the radio company, rises at the same time as the Sun during July around the 3rdand continues into early August. This is a period that is marked by lethargy and inactivity. Sirius is a large bright star in the Canus Constellation, therefore the name “Dog star”.

Most importantly it is the month of our independence and the Birth of a Nation. This makes us truly a youngster in the company of European nations yet with our resiliency and fortitude we have become a global force. Although it is not the exact date we do celebrate this day July 4th, 1776 as our Independence Day.

Some interesting dates and occurrences as well as historical meaning is abundant, as with other months, where you truly cannot go through a day, week or month without some significance. The Birthstone for July is the Ruby. The Flower is Larkspur or Water Lily. The Zodiac signs are Cancer until the 22nd and Leo until the end of the month. It’s also the annual “Shark Week” marathon which will always make you feel that much more confident when you go to the beach to cool off in the ocean.

Some notable days, dates and events;

Quite a month and there is plenty more. July is also National Hot Dog month as well as National Ice Cream Month. My favorite part of the Hot Dog celebration is the Hot Dog eating contest at Nathans in Coney Island. If you have never seen this you should at least once in your life. This is where competitive eaters try to beat their opponents by eating the most Hot Dogs. Joey “Jaws” Chestnut holds the record for eating them by swallowing 72 Hot Dogs in 10 minutes. I am quite sure that the number would change if the Dogs had Mustard and Onions or Sauerkraut on them.

Another classic is when the Blue Angels, The Thunderbirds or the Snowbirds from Canada are giving an air show over southern Brooklyn and Queens and Long Island. This is an incredible sight to witness the precision and great skill it takes to maneuver their aircraft. But the Pa de resistance is the elaborate Macy’s Fireworks display between Northwestern Brooklyn and East Manhattan. I have had the pleasure to have watched this show live for 12 or 13 years and have never seen any fireworks show that could top it. Although such a busy day and night you should experience it at least once in your lifetime.

July is also a month where we (in Hockey) do our Aviator Hockey School, July 9thto July 13th(with another week 8/13 to 8/17) with a full day of Hockey Hockey and Hockey. Plus some other surprises as well. If you haven’t signed up, what are you waiting for, an invitation? Yu just got one so come on in and let’s have some fun, laughs and hard work while improving our game. Just go to Aviatorhockey.com or visit our Customer Service located on your left as soon as you enter our facility. There is so much to do and so much to experience at the Aviator Sports and Events Center on a daily basis. Ice Skating, Figure Skating and Hockey, Gymnastics, Soccer, Basketball, Pickle ball, Volleyball and on and on. Sports bar and lounge on the Mezzanine, full food court and daily specials throughout the building. Public Skating is a great way to beat the heat and the Dog Days of Summer, so why not come in, cool down, get fed and go home happy.

Here at the Aviator there is something for everyone and everyone for something! 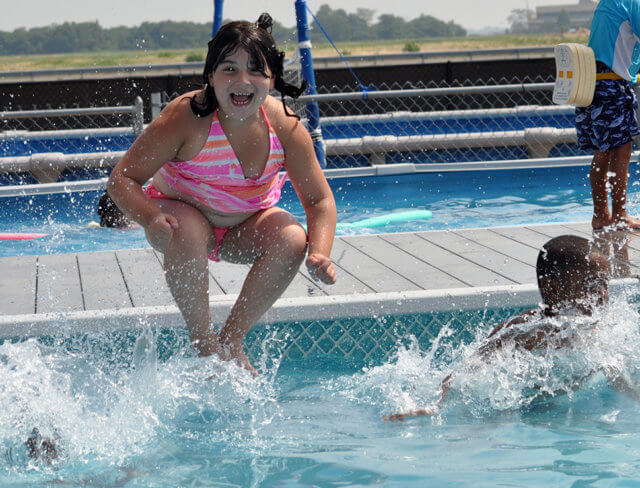 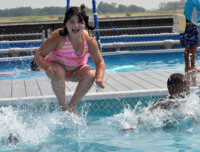 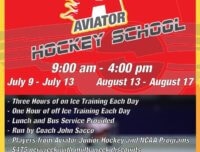